Biologics, also known as biological products, are any type of medicines derived from living organisms such as humans, animals, or microorganisms via highly complex manufacturing processes and administered under closely monitored conditions. This is in contrasts to traditional non-biologic pharmaceutical drugs, which are synthesized in a laboratory through chemical processes without the use of components of living matter. Cancer, infectious diseases, autoimmune disease are among the ailments for which biologics are used to prevent, treat, or cure (Fig. 1). 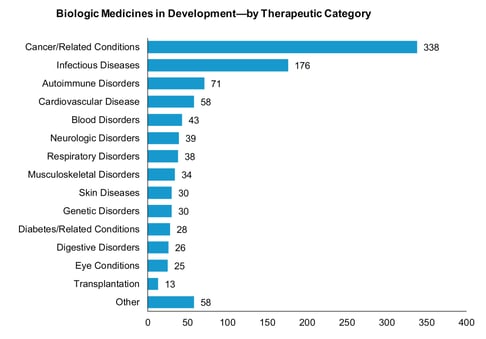 Note: Some medicines are being explored in more than one therapeutic category.

Biologics include a wide variety of products such as monoclonal antibodies, vaccines, gene and cell therapies, and recombinant proteins (Fig. 2). 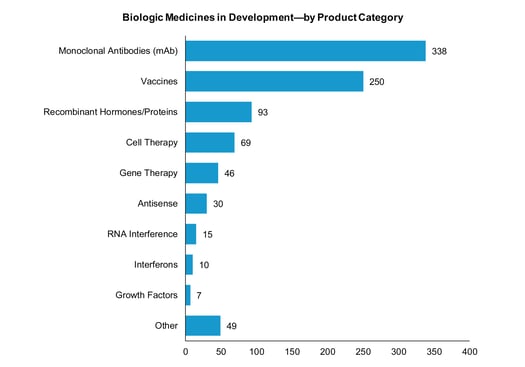 Monoclonal antibodies are by far the most researched category of biologics with at least 338 therapeutic mAbs currently being developed by pharmaceutical companies [1].

Antibody engineering has significantly advanced ever since the approval of the first monoclonal antibody by the United States Food and Drug Administration (US FDA) in 1986 [2]. Therapeutic antibodies currently available in the market are safe with fewer adverse effects owing to their high specificity. Consequently, antibody drugs have become the leading class of newly developed drugs in recent years. Eight of the top ten bestselling drugs worldwide in 2018 were biologics. In 2018, the global therapeutic monoclonal antibody was worth roughly US$115.2 billion, with revenues expected to reach $300 billion by 2025 (Fig. 3) [3].

Figure 3. Timeline from 1975 showing the successful development of therapeutic antibodies and their applications [3].

As of December 2019, US FDA had approved 79 therapeutic mAbs, including 30 for cancer treatment [4].

AbbVie’s Humira and Merck's Keytruda are among the top-selling biotechnology drugs in the world, generating 19.6 billion and 11.1 billion U.S. dollars, respectively, in 2019 (Fig. 4) [5]. Oncology, autoimmune/immunology, hematology, ophthalmology, and dermatology are among the top five therapy areas in 2019. Oncologic treatments account for six of the top-selling drugs in 2019, making oncology the most targeted field [6].

Bristol Myers Squibb, AbbVie, Pfizer, and Roche are four pharmaceutical companies with more than one best-selling drug of 2019. Bristol Myers Squibb had the most top-selling drugs (Eliquis, Opdivo, and Revlimid) in 2019, accounting for 63% of the company's total revenue. Whereas AbbVie's revenues in 2019 were significantly reliant on its main products (Humira and Imbruvica), which accounted for 72% of the company's total revenues [6]. The United States spent approximately 45 billion U.S. dollars on biotechnology research and development. In addition, the United States had approximately 34% of the world’s share of biotechnology patents filed in 2014, while Germany filed 8% of global biotech patents [5].

The Rise of Biosimilars

Biosimilars save money in the long run, with higher savings coming from newer launches competing against more expensive drugs. The gap between the originator and the mean Average Sales Price (ASP) of their biosimilars ranged from 8.1 percent to 45.1 percent lower than the originator products as of July 2020 (including insulins) [7]. Biosimilars saved 6.5 billion U.S. dollars annually in the second quarter of 2020, and savings are expected to exceed 100 billion U.S. dollars over the next five years [8].

A biopharmaceutical product knowledge base is the need of the hour

Antibodies are the most successful class of biotherapeutics because of their binding versatility [9]. With the rapid growth of therapeutic antibody research, the chances of a specific antibody being the only one against a certain antigen are decreasing. Understanding the methods used to produce competing antibodies, as well as their pros and cons, can be extremely helpful in moving therapeutic antibodies forward. Data from clinical trials dominate the scientific literature on therapeutic antibodies, rather than the details of pre-clinical development that is underway for nearly two-thirds of all therapeutic antibodies. The information on the latter could only be obtained from patents. Many researchers are put off by patents' opaque and archaic language but hidden in the text of these files are details about antibody sequences, assay techniques, epitopes, and much more. Patent applications are usually the first public disclosure of novel antibodies, often months or even years before conference papers or clinical trials. Researchers can identify novel antibodies in early stages of development months or years before they are formally announced by mining the patent literature.

There are very few databases that harvest this information. The IMGT Monoclonal Antibody Database and WHOINNIG are two non-commercial resources for antibody research. Other databases that aren't unique to antibodies, such as ChEMBL, DrugBank, and KEGG DRUG, also capture WHO data. Most databases deliver additional metadata for their therapeutic entries, such as clinical trial status, companies involved in development, target specificity, and alternative names. While these archives include sequence information, it is currently not possible to query them by sequence or to bulk-download relevant collections of therapeutic sequences for direct bioinformatic analysis.

Excelra is strongly positioned to deliver tailor-made curation on chemically defined antibodies (i.e., antibodies with a known primary amino-acid sequence) connected with their antigenic target, which can be either a protein or a chemical entity.

For more information and to connect with our scientific teams, write to us on: marketing@excelra.com


The website is best experienced on the latest version of Chrome, Firefox, Safari and Internet Explorer browsers